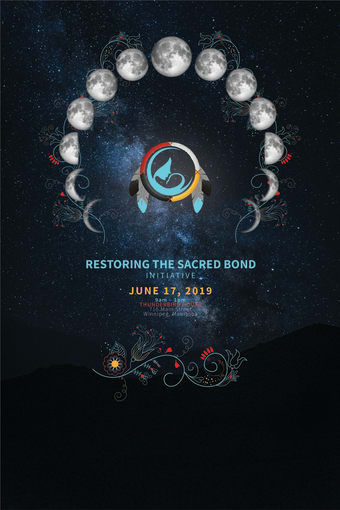 The Southern First Nations Network of Care (SFNNC) and Wiijii’idiwag Ikwewag invites you to a sacred feast and ceremony to honour and bless it’s new initiative, Restoring the Sacred Bond. This initiative is aimed at reducing the number of Indigenous infants in government care in Manitoba.

This historic launch will take place on June 17th, on the full moon of June at the Thunderbird Lodge, at 715 Main St. starting at 10:00 a.m. This historic Initiative, called Restoring the Sacred Bond, led by the SFNNC and Wiijii’idiwag Ikwewag, will match vulnerable expectant mothers to Indigenous birth helpers.

“We will identify and take referrals of expectant mothers across southern Manitoba and connect them with a birth helper to provide support before, during and after the birth of her child for up to one year. Part of the process will help the mother reconnect with traditional cultural practices and strengthen her support system,” says Jolene Mercer, Executive Director of Wiijii’idiwag Ikwewag.

The two-year Initiative, financed through a Social Impact Bond (SIB), will pair Indigenous mothers with a birth helper to provide stronger, culturally-appropriate support. SIBs encourage partnerships between the government, the private sector and community groups to achieve positive outcomes. With funding secured from eight investors, including local investment, Restoring the Sacred Bond expects to begin accepting expectant mothers in September 2019.

While some investors wish to remain anonymous, we are pleased to recognize the Winnipeg Foundation as one of the leading investors, with a $1-million contribution. Other investors include the McConnell Foundation, C.P. Loewen Family Foundation, Lawson Foundation, Inspirit Foundation and the Children’s Aid Foundation of Canada.

“Our Indigenous birth helpers will support those mothers through pregnancy, birth and the first months of their children’s lives,” says Tara Petti, CEO of the SFNNC. “The program will seek to reduce the number of infants apprehended in the days and months after birth – an event far too common in Manitoba today.”

“The soul of sovereignty, taking back control of our lives, lies in birthing, and everything before and after it,” says Grand Chief Jerry Daniels, Southern Chiefs Organization. “Restoring the Sacred Bond is very important first step towards this end.”

On June 3, 2019, the final report on the National Inquiry into Missing and Murdered Indigenous Women and Girls has called for the “end to the practice of targeting and apprehending infants (hospital alerts or birth alerts) from Indigenous mothers right after they give birth.” The Restoring the Sacred Bond Initiative is a response to this Call to Justice. For more information about Restoring the Sacred Bond, visit www.restoringthesacredbond.ca

For more information about Restoring the Sacred Bond, visit www.restoringthesacredbond.ca

For more information contact Jim Compton at jim.compton@southernnetwork.org or call 204-782-5191.

Learn More About Our Initiative

If you would like to learn more about the Restoring the Sacred Bond Inititave, please feel free to start a conversation.